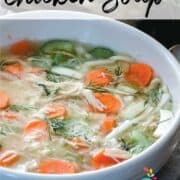 Old-Fashioned Chicken Soup is the ultimate comfort food. There's no need to eat the junk in a can when you can make your own healthy chicken soup in under two hours.

Every culture around the world has their own version of chicken soup for good reason. A good chicken soup is loaded with collagen, vitamins, and minerals and can be used to prevent illness, not only cure the common cold.

To make my soup, I use a 7 or 8-quart stainless steel pot, which makes 10 cups of soup. If you have a big stockpot, use that to get even more soup. The cooking time is the same. You can add some more water to the pot. You can even add a few extra chicken breasts for the last half hour of cooking.

How to Make Old-Fashioned Chicken Soup

Also known as Jewish Penicillin, chicken soup is not only hydrating, but it is full of collagen and calcium from the chicken bones and nutrients from the vegetables and herbs. Organic or pasture raised chickens are best. Healthy chickens are free to roam and fed a diet of grasses, weeds, seeds, insects, and worms. Their feed is free of pesticides and insecticides and the better chickens are higher in Omega-3 fatty acids than their conventional counterparts.

"Let Food be Thy Medicine and Medicine Be Thy Food."

The soup tastes better the day after it's made. You can make your pot of soup, let it cool on the stovetop. Then, shred the meat, disjoint the chicken into 8 pieces, and slice the veggies you're keeping, placing them in a separate storage container.

Or, you can take the whole pot of soup and place it in the fridge to chill. In several hours, and the fat will rise to the top and harden. The fat can be spooned off, and you can heat the soup the next day.

Why is Apple Cider Vinegar in The Soup?

Organic Apple Cider Vinegar draws the nutrients from the chicken bones. You will not taste it in the end product.

How to Store Chicken Soup

Ditch the cans and try our Green Pea Soup. It is made in under 30 minutes and tastes better than anything in a can.

I also have a recipe for Poached Chicken Breasts. I take the breast and gently simmer them. They cook in 20 minutes and make the perfect chicken for chicken salad. If yo like plain cold chicken, maybe with a little mayonnaise, this could be the recipe you're looking for. 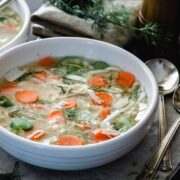 TO PREPARE THE SOUP

TO SERVE THE SOUP WITH EXTRA VEGGIES

Hi! I'm Felice. Join me on my culinary adventure in Key Largo, Florida, where I eat, cook, shop, and travel for fresh fish, fruit, vegetables, and more!