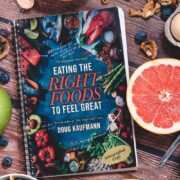 The Kaufmann Phase 1 Diet by Doug Kaufmann of the popular website and TV program called Know The Cause, is a safe, clean keto (low-carbohydrate) diet. By following this diet, you minimize your body's exposure to foods contaminated with fungi (mold) and cut off its food supply. By eliminating grains, most processed foods, and avoiding sugar, the fungi die off and your well-being is in reach. Chronic aches and pains, fatigue, brain fog, disease, and extra weight can be eliminated, or greatly reduced, and you can live your best life!

As I explained in My Journey to Better Health, I had been suffering from gluten intolerance for many years.

There was wheat in almost everything I ate and while working as a chef at Whole Foods, I went on a gluten-free diet. As my body detoxed, I quickly learned that I had an enormous problem with what I originally thought was only wheat. There was more healing that had to be done. The gluten-free diet was just the tip of the iceberg.

Three years into my gluten-free diet, I saw Doug Kaufmann on television. He was discussing nutrition regarding the fungi that live in the belly. He said the fungi thrive on grains, sugary fruits, yeasts, and they love when you take antibiotics, which makes their colony grow even stronger. The gluten-free alternatives I was eating were making the fungi proliferate and I knew they had to be stopped. I thought gluten-free bread was healing my body, but it was just replacing wheat with other starches that were harmful. There was more to the gluten-free diet, and I set out to find answers.

I felt great (or I thought I did) while I was strictly gluten-free. What I didn't know is that I had more healing to do. About two years into my healing, from looking at an allergy test, my doctor told me I had Leaky Gut Syndrome, a condition that is often associated with fatigue, belly pain, and many diseases. Leaky gut occurs when the intestine walls become permeable.

"Disruptions of the “gut-blood barrier” can cause “leaky gut syndrome which can allow toxins and undigested allergenic proteins to enter the bloodstream. This leaky gut syndrome is believed to be related to many chronic diseases including asthma, chronic fatigue, food allergy/ intolerance, rheumatoid arthritis, inflammatory bowel disease, autism, dementia, and other autoimmune diseases," according to Doug Kaufmann (1).

The Kaufmann Diet eliminates the foods that cause leaky gut including sugar, wheat corn, peanuts, most kinds of vinegar, soy products, alcohol, and animals that were fed these products before slaughter.

How Fungi Enter Our Bodies

From an article entitled Systemic Fungus, Kaufmann writes: "Fungi can gain access to our bodies in many ways, whether it is via the food we eat, what we drink, the air we breathe, the medicine we take or through things we touch, including other humans. Fungi are opportunistic organisms; given the opportunity, they will colonize anywhere, including our own bodies. Often, the point of entry is the gut; particularly if you have taken antibiotics (mycotoxins, themselves) the gut is where pathogenic fungi will first colonize. From there, they can proliferate throughout the body. This is known as dysbiosis, or when fungi colonize in the gut in the absence of more beneficial bacteria.

Do you live in a house with a leaky pipe? Is there mold growing on the air conditioner ducts and on the walls of your home? Do you work in an old building? Fungi flourish in moist, damp air conditioner ducts and the air you breathe can have a detrimental effect on your health. Have you been prescribed multiple rounds of antibiotics as a child or later in life? If the answer to any of these questions is "yes," you may have an overgrowth of fungi in your body. The Kaufmann Diet can help!

According to the World Health Organization, mycotoxins are poisons produced by mold. They grow on grains, dried fruits, nuts, and spices. You can't see them and you certainly cannot taste them.

Furthermore, mycotoxins grow right on the crops in the fields and continue flourishing after the crops are harvested. They continue to multiply on crops while in storage silos and mycotoxins survive high heat food processing.

The Animal Products You Eat

Meat, eggs, and dairy products all come from animal sources that may have been ingesting mycotoxins (corn, soy, and wheat) in their feed. When you eat the steak or the eggs and drink the conventional milk, where do those toxins go? That's right! Right into your belly!

Ted Slanker of Slanker Grass-Fed Meat explains the key component to purchasing quality grass-fed meat. He says the requirements for "grass-fed" meat companies are loosely defined by the USDA and consumers should be cautious.

"The only important difference between meat products is what they feed the animals," writes Slanker. "All grass-fed, grass-finished meats have 100% of the nutrients required by man in perfect balance. Grain-fed meats, no matter how they are labeled, are anemic and nutritionally deficient. Grass-fed meats are the most perfect food for optimum health." (4)

How Do I Know If I Have Fungal Overgrowth?

How are you feeling? In addition to having low or no energy, and being absolutely lazy and unambitious, the following list of conditions could be related to a fungal overgrowth in your gut:

What are the Side Effects of the Kaufmann Diet?

The significant side effect of the Kaufmann Phase 1 Diet is better health.

I've been reading, listening, and watching Doug Kaufmann for several years. People tell him at almost every Facebook Live show that their cancer is in remission, or their mother's tumors reduced by 50% as a result of the Kaufmann Diet, and they are just trying to live to a ripe old age and be proactive.

You might experience some discomfort for a brief time during the initial few weeks of the die-off period which is called a Herxheimer reaction. My detox period lasted 21 days. I had bad intermittent stomach pains that surprisingly were worse when I was hungry. It is different for everyone depending on how severe your problem is.

When you start, give your body the time it needs to heal, and you can experience better health, a happier disposition, and you'll look better too.

What Makes the Kaufmann Diet Different?

Doug Kaufmann makes the Kaufmann Diet what it is and why it is so popular. He truly cares about the welfare of his audience. The information he presents is thorough, easy to understand, and well-presented. He's on Facebook Live on Tuesday and Thursday afternoons and answers your questions on air.

Who is Doug Kaufmann?

Doug Kaufmann has been working in mycology, the study of fungi, for almost 50 years. He is the host of the television program, Know The Cause, available in 200 countries and approximately 400,000,000 households worldwide. He is the author of 12 books providing guidance and knowledge about how to starve the body of parasitic fungi and supply the body with proper nutrition. (5)

Mr. Kaufmann served in the Navy from 1968 to 1972 as a hospital corpsman. He was trained in emergency medicine and worked in both the hospital and on the field in Vietnam. In Eating the Right Foods to Feel Great, he described Vietnam like this:

"If you have ever experienced a monsoon weather pattern like those seen in Vietnam, you know how miserable they can be. Now imagine a rain-filled monsoon weather front that lasts an entire week or two. Strong wind and drenching rain are the standard. Imagine a few more things: living outside during that week with no daylight 50% of the time, no walls, no heat, no change of clothes or shoes, no bathroom, and knowing that you might be surrounded by people who want to kill you." (6)

Wet, damp environments, caused a skin condition called Jungle Rot on many of our soldiers including Kaufmann. He returned to Los Angeles determined to get rid of it. He goes on to say that "Germs can enter the our bodies transdermally, and I am 100% convinced that this was the way the fungus gained access to the inside of me so long ago."

In time, Doug Kaufmann cured his detrimental skin condition and has helped millions of people heal their illnesses too.

What Can I Eat on The Phase 1 Diet

On the Kaufmann Phase 1 Diet, you will eat lots of fresh vegetables, clean meats, nuts, and eggs. All forms of sugar must be restricted. Items such as mushrooms, pickles, vinegar, yeast, corn, peanuts, wheat, and alcohol are to be avoided.

By eating a clean diet you will be rewarded in more ways than you could ever imagine. You can heal your leaky gut, destroy the colonies of fungi in your body and live life to its fullest. Phase One can be the most enlightening time of your life. When you get to know what your body needs to thrive, your mind will be clear, your body will perform better, and you will be a happier version of yourself.

I copied this page from Kaufmann’s book The Fungal Link to Health Problems, volume 2. I followed Phase One for several years and then moved on to Phase Two.

After a month or so on Phase One, you can carefully add a few more foods back into your diet. Phase Two includes foods such as brown rice, buckwheat, additional fruits, oatmeal, and sweet potatoes, to name a few. After avoiding sugar for a period of time, a peach or plum is going to taste divine but you are advised to take it slowly and limit higher carbohydrate foods. The old habits can come right back if you're not careful.

Recipes on Cooking in The Keys

The recipes on Cooking In The Keys are foods Michael and I eat at home. When I started this blog, my intention was to cook things that were "fun" and available in the Florida Keys, but I was cooking and baking many foods like Key Lime Pie that I don't normally eat. I gained some weight and my skin broke out, I started feeling "off" after meals and my energy waned. My old ways were sneaking back in and I didn't like it. I switched gears and went back on Phase One and now I'm sharing my favorite recipes. They are all easy to make and I hope you enjoy them.

Talk with your doctor or licensed healthcare professional before changing your diet. This is not intended to be medical advice.

Please Note: I have really cool relatives, but Doug Kaufmann is not one of them. We have similar last names. I watch him on TV like the rest of the world and I think the Kaufmann Diet is outstanding!

Hi! I'm Felice Kaufman. Join me on my culinary adventure in Key Largo, Florida, where I eat, cook, shop, and travel for fresh fish, fruit, vegetables, and more!